A Journey through Mark 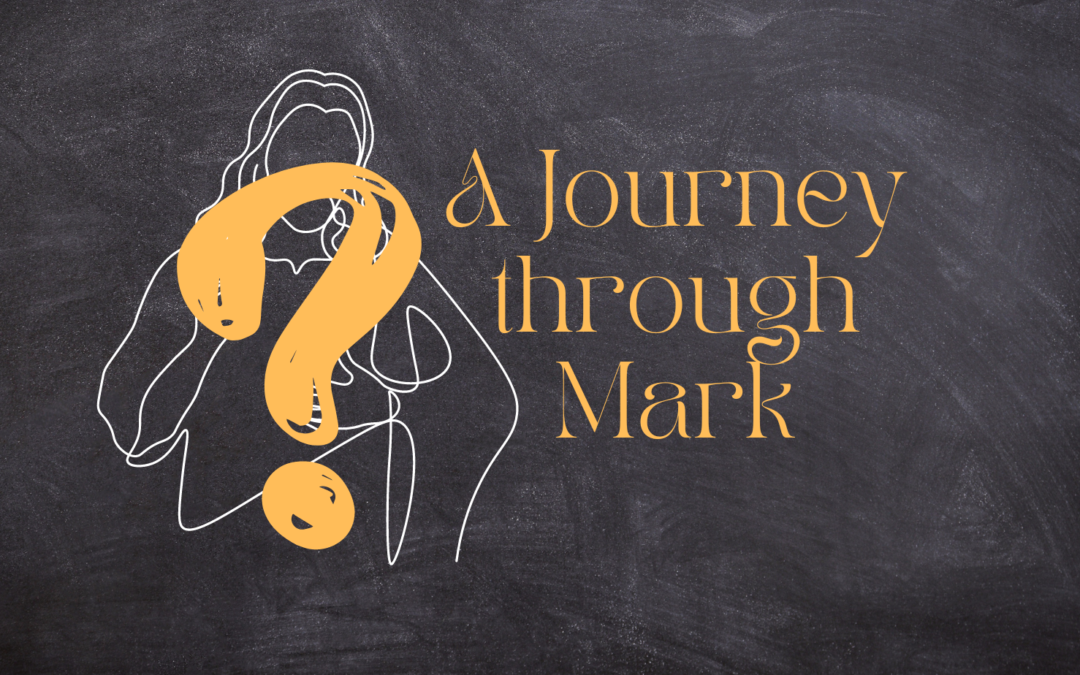 Mark: a masterpiece of storytelling

The Gospel of Mark is truly a masterpiece of storytelling. The whole gospel is organized around the cross. Jesus is racing, so it seems, toward the cross. This is why in the first half of the book, the word “immediately” appears so frequently. Jesus is almost running from one place to another, from teaching to healing to doing something else. But then Jesus reaches Jerusalem for Holy Week and the book starts slowing down. Mark even starts telling us when a new day has started. Finally, when we get to the cross, the pace really slows down and Mark starts keeping track of the hours. All along, people keep asking, “who is Jesus?” They see him, they listen to him, but there’s something about him that simply escapes their grasp. Mark knows that people from then on would continue to wrestle with the same question, and he writes his gospel, inviting us, as Fr. Wahlmeier pointed out, to journey along with the disciples toward the cross where the question is finally answered.

People just don’t get it

In the first two chapters of Mark, something odd strikes the reader. Jesus is introduced (to the reader) at the very beginning as “Jesus Christ, the Son of God” (1:1) and the gospel wastes no time in presenting many ways in which Jesus’ identity is made clear: He calls disciples to follow him (1:17); he teaches with authority (1:22, 27); he performs miraculous healings (1:32-34); he exercises authority over demons (1:34); he even forgives sins (2:5-12). In short, Jesus speaks and acts as having great authority, even as having divine authority. Jesus’ identity as the Son of God is clear. Yet – and herein lies the oddity – no one seems to be able to recognize who he is, except, of course, for the demons whom Jesus commands to be silent (see 1:25, 34; 3:12). This inability to recognize Jesus takes shape in the Jewish authorities as questioning and challenging: “Why does this man speak like that? He is blaspheming! (2:7); “Why does he eat with tax collectors and sinners?” (2:16); “Why do you, Jesus, allow your disciples to break the Sabbath?” (cf. 2:24); “Let us see if he will heal on the Sabbath” (cf. 3:1-2). This comes to a head when, very early in the gospel, “the Pharisees went out and immediately held counsel with the Herodians against him, how to destroy him” (3:6). They clearly do not see who Jesus is.

But it is not only the Pharisees, scribes, and the like who fail to recognize Jesus. The disciples, too, fail to understand Jesus (see 7:17-18; 8:16-18). They also fail to recognize who he is (see 4:41). The closest the disciples come to recognizing Jesus is expressed by Peter midway through the gospel. At this point, Jesus asks rather pointedly, “who do you say that I am?” To this Peter responds, “You are the Christ” (8:29). Yet even this profession is incomplete, especially given the fact that Peter immediately betrays his false understanding of what “Christ” means by rejecting the idea that the Christ should suffer and die (8:32-33). In fact, there are three such episodes wherein Jesus predicts his passion and the disciples fail to understand (8:31-33; 9:30-32; 10:32-34). Even after the transfiguration Peter, James, and John continue to appear blind (see 9:5-6, 10; 10:35-38), and through the rest of the gospel, Jesus’ other disciples do not appear any better (see, for example, 14:4-5; 16:8). In a certain sense, Peter was saying something true when he said, while denying Jesus, “I neither know nor understand” (14:68) and “I do not know this man” (14:71).

While the Jewish authorities, the disciples, and others cannot see or understand, there are certain other figures who show remarkable insight into Jesus’ identity. The first of these is possibly the Gerasene demoniac. When Jesus tells him, “Go home to your friends and tell them how much the Lord has done for you,” Mark relates that the former-demoniac “went away and began to proclaim… how much Jesus had done for him” (5:19-20). There is a similar subtle recognition of Jesus by the hemorrhaging woman. She must have some deeper understanding of who Jesus is, because, even though she is ritually and socially “unclean”, she knows that all she must do to be healed is “touch even his garments” (5:28). This unparalleled reverence for Jesus – which evidences this anonymous woman’s recognition of Jesus’ identity – is matched and confirmed by Jesus’ first word addressed to her: “Daughter” (5:34). She is part of his family (cf. 3:31-35).

As we move on through Mark, we are confronted with another figure who displays extraordinary perception, even more clearly than the Gerasene or the afflicted woman. Bartimaeus is a blind beggar who happens to be out when Jesus is passing by. Upon hearing that it is Jesus, he calls out “Jesus, Son of David, have mercy on me!” (10:47). What sets this man apart from Peter (who similarly called Jesus the “Christ”) is the context. This episode comes immediately after the third time Jesus predicted his passion and death and after the disciples show that they do not understand. John and James show this by asking Jesus to grant them seats of honor in his kingdom (10:37). They clearly do not understand: “You do not know what you are asking” (10:38). After the others “began to be indignant at James and John” (10:41), Jesus has to explain to them what proper ruling looks like in the kingdom; a proper understanding of which would follow if they first could understand – could “see” – who Jesus is and the type of messiah he will be.

Read in this context, the blindness and healing of Bartimaeus is charged with theological importance. While the disciples are spiritually blind to recognizing Jesus, Bartimaeus recognizes Jesus as king and messiah, is healed of his blindness, and then “immediately” he “followed [Jesus] on the way” (10:52). Bartimaeus, therefore, sees much more clearly than do the disciples.

The last figure whom Mark puts forward as exhibiting a true “seeing” and “understanding” of Jesus is the woman who anoints Jesus at Bethany (14:3-9). The very act of anointing she performs is that done for a king. Additionally, Jesus praises her for preparing his body for his burial (14:8). Viewing these points together, this woman appears to be the first to connect Jesus’ kingship with his passion.

Throughout Mark, then, there are those who see or understand, and there are those (the majority, apparently) who are blind. This contrast is set before us quite explicitly at the Cross where the verb “to see” (horáō) is used three times. The first time it occurs is when it comes from the lips of the bystanders who are mocking Jesus, saying, “Let the Christ, the King of Israel, come down now from the cross that we may see (idōmen) and believe” (15:32). The second is similar. After misunderstanding Jesus’ cry as calling for Elijah, someone says, “Wait, let us see (idōmen) whether Elijah will come to take him down” (15:36). In both these instances, then, the speakers want to “see” the proof of Jesus’ identity (which Jesus had stated explicitly at his trial – see 14:61-62) precisely by seeing Jesus off of the cross. This makes the third occurrence of horáō even more profound: Jesus does not come down, he cries a “loud cry” (15:37), and he dies; and yet the Centurion “saw” (idōn) how Jesus died and says “Truly, this man was the Son of God” (15:39). Finally, someone recognizes Jesus!

The first thing that stands out to us in this walk-through of Mark is the uniqueness of Jesus. He cannot be recognized or understood as one would recognize or understand any other man. And we see that throughout Mark there are those who are blind and there are others who can see. There is also a certain noticeable progression. While the Gerasene and the hemorrhaging woman’s recognition is rather subtle and centered around Jesus’ display of healing power, Bartimaeus and the woman who anoints Jesus appear to recognize something about Jesus’ kingship and passion. As we approach the Cross, those who recognize Jesus become more explicit in their proclamations. Also, it is at the Cross where Jesus is most perfectly recognized when – the very climax of the gospel – the centurion professes: “Truly, this was the Son of God!”

The Gospel of Mark is teaching something profound about the nature of God. It is only on the cross that Jesus is fully recognized because it is only on the cross that God is fully revealed. Who is Jesus, the gospel asks? Jesus is God. Who is God? God is the one who goes to the cross out of love for us. We didn’t know this about God before Jesus, but once we see it, it becomes clear: yes, that is precisely who God is.