“Do What Now?” Understanding Abraham’s Near-Sacrifice of Isaac 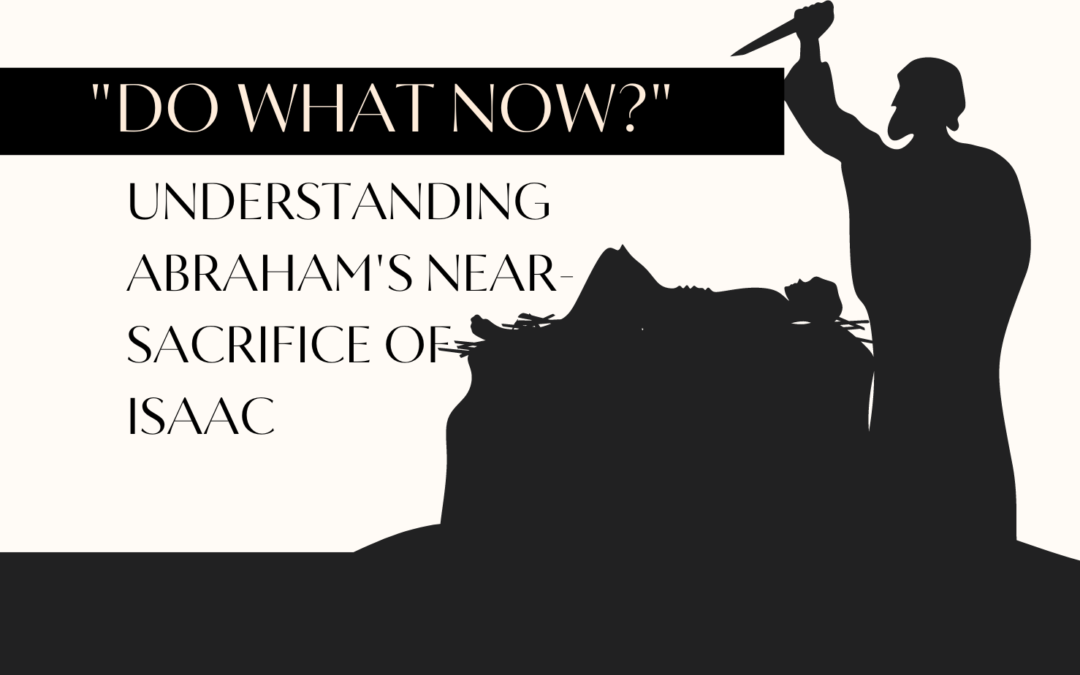 Genesis 22 contains one of the most confusing, and possibly scandalous, stories in the Bible. Is God so cruel as to demand a father to murder his son? Is Abraham wrong to obey so blindly? Could God command something like this again? Many questions arise from this story, but I think they all stem from misreading the story. A couple of things to consider first before diving in. This story was written down and came into its final form later in Israel’s history, after the law had been given to Israel. In the law are clear condemnations of child sacrifice. This is something the pagans do, but Israel ought never to do it. Why would the author include a story of God commanding Abraham to do what the people were expressly commanded not to do? Also, God never commands anyone else to sacrifice their child like this. So, the sacrifice of Isaac is utterly unique within the whole Bible. Why? Let’s dive in.

Context is crucial. Recall who Isaac is. Isaac is not simply the favorite child of Abraham. Isaac is the child of the promise. God swore a covenant with Abraham that Isaac would have countless descendants, would be Abraham’s heir, and that God would make a covenant with Isaac. If you have a chance, read through Genesis 15 where the covenant making ceremony is depicted. God tells Abraham to get these certain animals and split their bodies in two, placing each half opposite the other and some distance apart, allowing the blood to pool in the path in between. Sometime later, God appears to Abraham under the form of a “smoking fire pot and a flaming torch,” passes through the blood in between the animal pieces, and makes his covenant with Abraham (15:17-21).

If you’re feeling lost at this point, don’t worry. It’s confusing because we don’t share the same cultural customs. What God is doing with Abraham and the animal pieces is what the ancients would do in order to establish a covenant. They would establish the terms, swear an oath, and stand in the blood in order to symbolize what would happen if one were to break the covenant: he would become like the dead animal. Here, God “stands” in the blood and swears His oath to Abraham. This oath includes Isaac being the one through whom Abraham would have descendants. God reiterates this promise again when he announces Isaac’s coming birth (17:19, 21).

Isaac is the child of the promise, and if God were to break this covenant, He would die. Clearly, God cannot die, but He expresses His faithfulness in a tangible way that Abraham would understand: God cannot break this promise. If Isaac were not to be born, or if he were to die before having descendants, God would be breaking his promise. So you see, Isaac is quite unique. In fact, he’s the only one to ever be in a situation like this, and it is precisely this child of the promise that God commands Abraham to kill. Why? Because according to God’s covenant, nothing can happen to Isaac. God would be like a dead carcass, which is simply absurd.

God is inviting Abraham to a deeper faith in God’s faithfulness, an invitation which Abraham had in serious ways rejected in the past. Note, God is not calling Abraham to blind obedience. If I think God is calling me to kill someone, I can be certain that’s not God. What makes Abraham unique is that he has God’s solemn oath to fall back on. He may not know what God’s going to do, but he knows that Isaac can’t die, and if Isaac were to die, as the Letter to the Hebrews later comments, God would have to raise Isaac from the dead (Heb 11:19). In fact, Abraham even tells his companions that he and Isaac will come back after making the sacrifice (22:5). This is also why Abraham doesn’t object to or question God’s command as he had done on other occasions. Abraham doesn’t intercede on Isaac’s behalf like he did for Sodom. Rather he simply gets up and goes.

Application to Us Today

God will never command us to kill a child. This command only made sense in the unrepeatable context of Isaac and the covenant.

God will invite us, though, like Abraham, to a deeper faith in His faithfulness. For us the context has changed. Though hugely significant, our lives are not defined by the context of God’s covenant with Abraham. Our lives are defined by the context of God’s covenant made with us through Jesus’s death and resurrection, the covenant ratified in God’s own blood. God promises through this covenant that even if we were to die, God would raise us up from the dead. He has to do it because he promised He would.  “Hell, where is your victory? Death, where is your sting?”